Notice: Test mode is enabled. While in test mode no live donations are processed.

Press Statement Adjudication of Complaints in the Gbarpolu Case

The Liberia Election Observation Network – LEON – is deeply concerned about the way in which criminal procedures are being used by lawyers acting on behalf of complainants which has caused the long delays in adjudication of these complaints. LEON is also concerned about the length of time it has taken for the Board to issue its judgement in the Gbarpolu case and calls for investigations to encompass wrongs committed that may have caused the incident that forms the complaint.

There has been an unusually large volume of complaints in these Special Senatorial elections and two by elections with 16 candidates filing in their complaints with the NEC. The number of complaints compared to previous elections is unprecedented, which coupled with the slow pace of hearings raises concerns as we move towards 2023 when the number of candidates is likely to be many times greater. By trying to give due process to the candidates NEC hearings officers are allowing an overly legal process that has led to The Liberian Senate admonishing the NEC for being beyond its’ constitutionally mandated timeline for deciding complaints.

Article 83(c) of the Constitution of Liberia states that a “complaint must be filed not later than seven days after the announcement of the elections. The Elections Commission shall, within thirty days of receipt of the complaint, conduct an impartial investigation and render a decision which may involve a dismissal of the complaint or the nullification of the election of a candidate.” Chapter 6.2 (1) of the New Election Law reflects the same timeline, adding “The determination shall be accompanied by a summary of the investigation and the reason for it.”

LEON has observed that the slow pace of the hearing process is largely due to lawyers representing aggrieved candidates introducing technical legalities using criminal and civil procedural laws instead of the New Elections Law. The NEC on its side is accepting these procedural laws in contradiction to its own guidelines on holding hearings. Election complaints hearings are not a criminal process but a chance for the NEC to investigate any complaints that have merit in order to protect the electoral process.

Following the discussions in the Senate, the NEC issued judgments in three cases this week and the Supreme Court also issued verdicts on two appeals. Five cases are still with the NEC at a different level and three are pending Supreme Court judgments.

The case of Gbarpulo, deserves special attention since it is still outstanding, which has given rise to rumors, speculation, and even a demonstration on Friday 19 outside the NEC. In summary, the CDC candidate Alfred G. Koiwood issued a complaint on December 21 against Mdm Botoe Kanneh (Ind) alleging violence and destruction of electoral materials one week earlier (before the first date for the delayed election). The Supreme Court ruled that no results could be issued from January 7, when the election finally took place, until the December 21 case is resolved. Madam Kanneh, was by then out of time to file a corresponding case against Koiwood’s supporters for similar violations on December 14.

The Hearing officer initially found that the case was outside of the scope of the NEC since these are criminal charges and need to be addressed through the justice system. However, the NEC board ruled against the Hearing officer this week The NEC overturned this decision on 24 February because the complaint falls with article 10.61 of the elections law on destruction of polling materials it is within their jurisdiction to investigate.

It is unclear why it has taken the NEC board five weeks from the Hearing Officer’s decision to render this judgment or how long it will now take to investigate the offenses. LEON notes that many people in the county accused Koiwood’s supporters of being responsible for stealing and pre-marking ballots which were what led to their destruction by Mdm Kanneh’s supporters. LEON insists that all cases of electoral violence are fully investigated, that any town leaders who presided over the unprecedented violence are brought to justice, and that this be done with equal attention to all sides. However, the result of the Board ruling and the stay order on the results is likely to leave the county without a senator for some time more.

It must also be noted that the NEC has been diligent in investigating suspected fraud or malfeasance which has also taken time. In River cess, for instance, the NEC ordered a limited recount of 30,000 ballots. Having discovered significant evidence of changes to the official results they have now ordered a recount of the entire county (upheld by the Supreme Court this week). That said, the NEC needs to be careful not to exceed necessary investigations and to take charge of hearings processes to ensure that all complaints are straightforwardly adjudicated within the legal time frame.

LEON awaits the advice of the Supreme Court on the constitutionality of NEC decisions made outside of the complaints period. We call on the National Election Commission to train hearing officers and lawyers in complaints procedures so that they cease wasting time on procedural arguments that have no place in a dispute resolution system. Moreover, LEON calls upon the Board of Commissioners to investigate the allegations of electoral malfeasance in Gbarpolu, looking at all the behavior of all concerned regardless of whether they are complainants or the accused.

The Liberia Elections Observation Network (LEON), launched in May 2017 is a platform of four Liberian Civil Society Organizations: The Catholic Justice and Peace Commission (JPC), Liberia Crusaders for Peace (LCP), Federation of Liberia Youth (FLY) and National Union of Organizations for the Disabled (NUOD) with the goal to meaningfully contribute to democratization processes in Liberia.

Destruction, Removal or Mutilation of Ballot Papers or Boxes

Any person who carries away, destroys, conceals, or mutilates, or attempts to carry away, destroy, conceal or mutilate any ballot paper, register, ballot box, election writ, certificate or returns of any official document made in connection with an election for the purpose of invalidating the result of such election is guilty of an election offense and punishable by a fine of Five Thousand ($5,000.00) Dollars or by imprisonment for a period of five (5) years or both.

LEON receives funding from the Swedish Cooperation and Irish Aid and technical support from the Carter Center and would like to express its appreciation to these partners. LEON has been observing and monitoring the elections campaign around the country since July with one Long Term Observers (LTOs) stationed in each county, 700 election day observers stationed in different polling precincts and a core team in Monrovia. LEON has monitored tallying, all the re runs and been following complaints processes.

LEON has issued reports on the voter registration update, two pre election reports, two social media monitoring reports, four election and tallying statements, and two statements on the re runs based on observer findings. These are available through the LEON website. 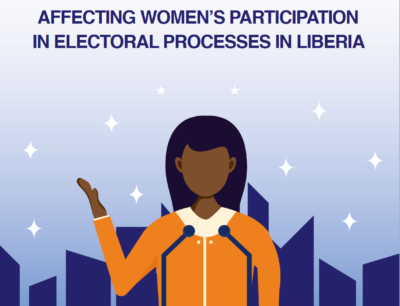 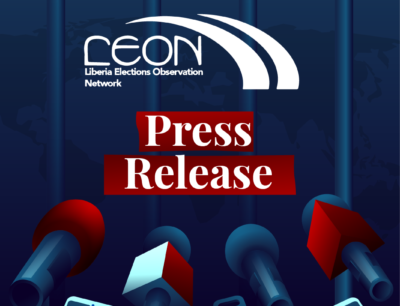 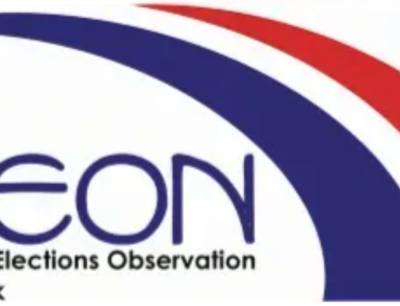 LEON Position Paper on the Introduction of BVR in Liberia Elections